Take high heels for example. Most women will wear a pair of high heels at some point, or, if you are like me, everytime you go to a club, bar or party.

So lets take a look at the high heel : 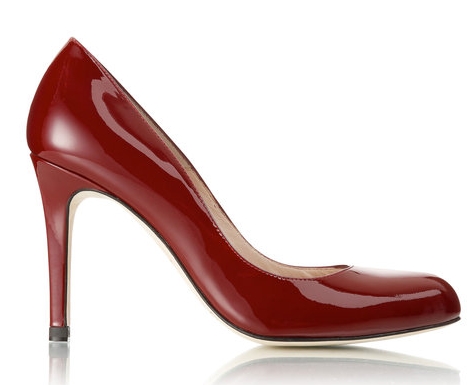 This is an average looking high heeled court shoe. Pretty, isn’t it?

Why is it pretty? If I told you that you had to walk on your tip toes all day due to a high spike attached to your heel, does that sound pretty? Or does that sound like torture? Surely it sounds uncomfortable at the very least.

High heels are uncomfortable, a fact, I’m sure, that all women who have worn them will attest to. So why do we wear them?

It’s simple. They make us look good. In high heels, our legs look longer, our calves look shaplier and the stance they force us to take on pushes our breasts forward and our butts out. In short, they make us appear more sexually attractive.

I find it so sad that we are willing to wear uncomfortable shoes simply to look more sexually appealing. So here is something to think about next time you are tiptoe-ing around in heels complaining about your sore feet. You are doing it to yourself, for the sake of vanity.

However I do understand why we women chose to torture our feet like this. It’s because other women do it too. If you don’t wear heels and your friends do, you might think that, in the vanity stakes, they have an unfair advantage, their legs are shown off better than yours are, blah blah blah. So who’s bright idea was it that got us all hobbling around on spikes in the first place?

According to ‘Heikes Heels’ (http://www.heikes-heels.de/english/history-shoes/1.htm)

‘The invention of the high heel is attributed to Catherine of Medici in Paris, in the 16th century, who used them due to her short stature, and soon introduced them into fashion amongst the European aristocracy.’

Other theories surrounding the introduction of heeled or high shoes centre around horse riding, butchery and men asserting their dominance over women.

Well, in these cases, the heel was used for its functionality. In the case of heels in horse riding, this was to make it easier to keep your foot in the stirrup, think of modern day riding boots or cowboy boots. Also, it is said that butchers in Egypt wore heels in order to stay above the blood of dead animals they had butchered and, pehaps most intrestingly of all, many scholars have suggested that high shoes were first worn by concubines, in order to make it difficult for them to escape from harems on foot.

So if you wear heels today, and (a) they are not designed for horse riding, (b) you are not a butcher and (c) you are not being prevented from escaping some rich guy’s harem of concubines, it’s basically due to some 16th century Queen of France who decided that being Queen wasn’t enough, she had to be taller too.

Think about her next time you are considering if the pain is worth it. I know I will.

In addition to being painful to walk in and almost impossible to run in, high heels can be damaging to your health. Take a look at the problems below, all of which can be caused by high heels :

(This list was taken from Wikipedia and can be found at http://en.wikipedia.org/wiki/High-heeled_footwear )

So if you wear heels a lot and you are not going to give them up, try and be a bit kinder to your feet. When you go on nights out in heels, at least take a pair of flats in your handbag for any walks home or between clubs. After all, if you ruin your feet because of heels, you only have yourself and Catherine of Medici to blame, and she doesn’t care, she’s a dead Queen.

Remember, high heels are not much different from these :

Thanks for reading my blog 🙂

(All images taken from Google Images)